Florida’s position on the Atlantic Flyway and the diversity of resident waterfowl, shorebirds and songbirds give residents a plethora of opportunities to view birds some people only dream about.

“Few other spots in the country offer such a large number of bird species as Florida,” says Mark Rachal, manager of Florida Coastal Islands Sanctuaries for Audubon Florida, based in Tampa. “From our resident roseate spoonbills and scrub-jays to migratory songbirds—including indigo and painted buntings—the state is one of the consistently best birding places in North America.”

Millions of migrating birds follow the Atlantic Flyway, traveling along the eastern coast of the United States. They head to Central America and South America to avoid the cold, then journey back north in the spring to their breeding grounds. Some of the most popular nesting places for shorebirds and waders lie along the flyway.

In south Florida, the Audubon’s Corkscrew Swamp Sanctuary between Naples and Immokalee was historically the largest nesting colony in the U.S. for wood storks. Sixty-five years ago, Audubon was instrumental in protecting this 13,000-acre area of old-growth cypress, providing safe haven for the wood storks.

“Corkscrew Swamp Sanctuary is considered one of the crown jewels of wildlife sanctuaries in Florida because it represents a vanishing ecology,” says Renee Wilson, communications associate with Audubon Florida. “One of our goals is helping slow the loss of shallow wetlands that these and other wetland birds depend on for food, shelter and safe breeding grounds.”

Hundreds of thousands of acres have been designated as wildlife sanctuaries.
“These areas range from federal and state lands to local jurisdictions and private ownership, but the key is that they provide protected habitats for wildlife,” Mark says.

“The Coastal Islands Sanctuaries are chiefly composed of mangrove islands and are only accessible via boat or kayak. They’re marked no trespassing, but visitors can get great looks at the many wading birds—such as pelican, herons, spoonbills and cormorants—from the water.

“We ask that people respect the birds and the buffers we’ve established so that the birds can go about the business of raising their chicks. Designated sanctuaries provide the least stressful and least disturbing environments for birds to continue to breed and successfully raise their young.”

Herons and egrets top the list of prolific wading birds. The great blue heron—the largest heron in North America—is an elegant bird that lives near freshwater and saltwater. During mating season, these magnificent birds grow showy feathers to attract a new mate.

Other species include the green heron, little blue heron, tricolored heron, and yellow- and black-crowned night-heron.

One of the most colorful waterfowl residents, the purple gallinule, has a dark peacock blue-and-black shaded body with a distinctive red-ringed bill with a yellow tip.

Found in freshwater marshes in Florida, it can range as far south as South America. Around 10 inches long, its wingspan is more than 20 inches.

“Perhaps the most showy, the roseate spoonbill, has been studied by Audubon staff,” Renee says. “Since 2004, Dr. Jerry Lorenz at Audubon’s Everglades Science Center has specialized in banding roseate spoonbills to track their changing habits and habitats. His study has shown that their population is moving northward.

Although they used to be confined to southern Florida, there are now colonies as far north as St. Augustine.” 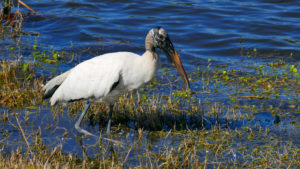 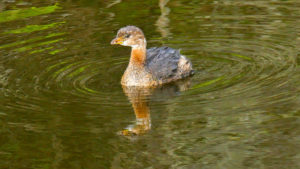 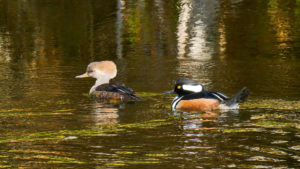 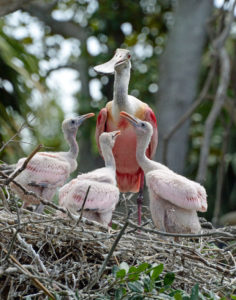 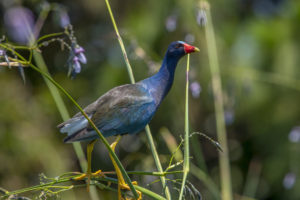 “The songbird population varies depending on what part of the state you’re in, but reliably, you’ll see northern cardinal, Carolina wren and northern mockingbird, to name a few,” Renee says.

Along Lake Okeechobee, snail kites have become commonplace. The grayish-brown birds have a profile similar to hawks. Unlike hawks, they feed on snails rather than rodents, snakes, small birds and mammals.

“They have a very limited range, from Lake Okeechobee up through central Florida near Gainesville,” Renee says. “Because of an infusion of exotic South American snails in Lake Okeechobee, it’s more common to see snail kites there.”
On the southern Gulf Coast, look for black skimmers, willet, white ibis and American oystercatcher.

Along the Florida Panhandle, the most popular species are red-eyed vireo, Northern parula and, at times, wood thrush. 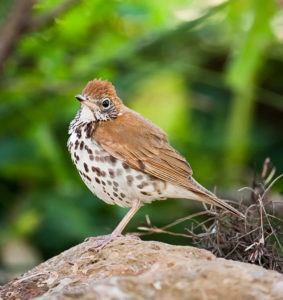 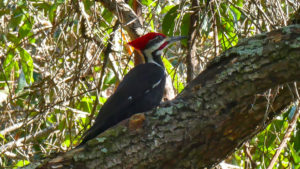 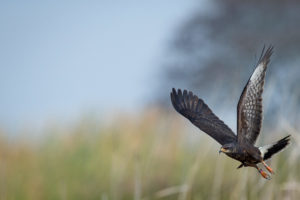 Mark says birdwatching is one of the nation’s fastest-growing pastimes.

“Especially with the pandemic, birdwatching gets people outdoors in smaller groups and gives people an activity that they can do close to home,” he says.

You can begin by setting up a couple of feeders in your backyard.

“Once you’ve been feeding the birds for a while, you’ll begin to recognize the resident birds fairly easily.”

If you want to become more familiar with bird species, Renee suggests starting with a good bird identification app, such as Audubon’s bird guide or Merlin. Both are available for iPhones and Android.

“A field guide can also come in handy, as will a pair of good binoculars,” she says. “If you really want to get serious, having a good camera with a telephoto lens will put you much closer without having to disturb the birds—or consider purchasing a spotting scope, which provides an even closer look.”

“Although you think you may have only a dozen varieties in your yard, once you become an astute observer, you’ll soon notice so many more species,” Mark says. “No matter where you live—whether you’re birdwatching in your own backyard or traveling to a birding hot spot—you’ll soon be seeing birds everywhere.”