Using Key limes and his grandmother’s recipe, Kermit Carpenter serves up pies and more from the heart of Key West

Kermit Carpenter—yes, that is his given name—is all about green, Key limes and his dog, Pi. “My parents had too many boys—four, plus my sister,” Kermit says. “By the time they got to me, they ran out of names. My mom knew that Teddy Roosevelt had a son named Kermit, so I guess you could say I was named for the son of a politician.” (Photograph by Karen Haught )
Up Close

“Growing up in Pennsboro, West Virginia, it was always a treat to get to spend two to three weeks with her in Florida because it was so different from our hometown,” Kermit says. “She was always baking and taught me how to cook, but the best thing she ever taught me was how to make her extra-special Key lime pies.”

After a 20-year career as a buyer/manager for a large department store in Washington, D.C., Kermit decided to move south. His sister, Anita, and her husband, John Meyer III, lived in Florida, so it was the perfect place to settle down.

“What’s not to like about being in the sun and the ocean all the time, plus a chance to live near my family?” he says. “It just made sense.”

Kermit took a job as a bookkeeper for Papa’s restaurant and filled his extra time selling Key lime smoothies in front of the eatery. When the head chef/owner suddenly left, Kermit was faced with coming up with new employment.

“I’d always wanted to open a quality gourmet food store that would be unique to Key West, so we started listing everything we could think of that you could put Key limes in, and it just grew from there,” Kermit says.

Twenty-eight years ago, he, John and Anita opened the first Kermit’s Key Lime Shoppe on the waterfront on Elizabeth and Greene streets in Key West. Their first product was none other than Key lime pies using his grandmother’s recipe.

The trio went on a quest to find suppliers for their Key limes, turning to small orchard growers in Florida and Texas.

“We bottle our own juice using fruit sourced from a specialty fruit broker who seeks out the best-quality Key lime crops, which are currently coming from Mexico and Peru,” Kermit says. “Key limes are very different from Persian limes.

“Most people think that a lime is a lime, but Key limes are smaller than Persian limes, have very thin skin that’s more yellow than green and are loaded with seeds. And you know what makes our pies have that pucker power? Our juice is double-strength to really bring out the flavor.”

If you are using your pie recipe with Kermit’s Key lime juice, you should use half as much juice, he says, noting you could instead use the recipe printed on his juice bottle.

“John, who’s really the business brains behind Kermit’s, pointed out that our space in Key West could serve our customers there, but if we were to grow, we needed to expand our production facilities,” Kermit says. “Space in Key West was not only hard to find, what little there is was very expensive.”

The partners looked north and settled on warehouse space at the DeLand Municipal Airport, where they opened a production and shipping facility and another retail store about 15 years ago. The DeLand operation is overseen by John and a staff of 17.

As the business flourished, people came from all around to buy Kermit’s pies. He opened a second location in Key West on the corner of Front and Duval streets, just steps from Mallory Square and the hundreds of thousands of cruise ship passengers who visit Key West every year.

The family recipe for the pies is no secret. The stores sell bottled Key lime juice with the recipe printed right on the label.

Kermit has another pie connection in his life: His 3-year-old Portuguese water dog is named Pirate.

“We call him Pi and he’s the best dog ever,” Kermit says. “He goes with me pretty much everywhere.”

Although many people retire to the Keys, Kermit says he has no intention of quitting work.

“I work seven days a week, doing everything including delivering wholesale orders to fish markets and restaurants,” he says.

He does take a break once in a while. When he does, he’s in good company.

“Jimmy Buffett’s recording studio is right next door to the main store shop, so we’re always delivering pies over there,” he says. “We’ve made special pies for Zac Brown, who loves blueberry Key lime pies, and Kenny Chesney is a big fan of our strawberry Key lime pies.”
As he reflects on his life so far, Kermit says he’s right where he needs to be.

“For me, being here in Key West is all about the weather,” he says. “I love the heat. Since moving here, I’ve never looked back. But I never would have thought when I visited my grandmother back then that I would be living my dream right here and making pies from her recipe.” 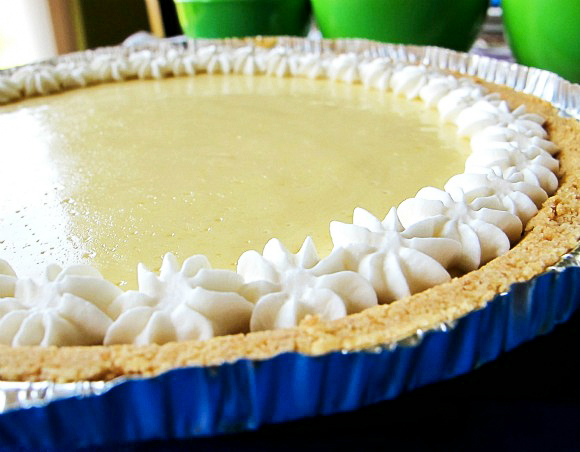 IF YOU WANT TO GO: