Everglades National Park is an hour drive from Miami and encompasses 1.5 million acres of wetland in south Florida. The main entrance in Homestead is the best starting point for bird-watching.

Dry season—November to March—is the busy season. Warm winters attract a large variety of wading birds and their predators. During the wet season from April to November, it’s very buggy, and many ranger programs aren’t offered. Check the schedule for ranger programs ahead of time.

In 1934, Congress established the park. It has since been designated as an International Biosphere Reserve, a Wetland of International Importance and a World Heritage Site. At least 1 million people from all over the world visit the Everglades each year. 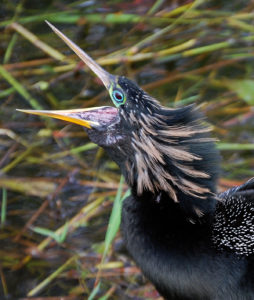 The park has myriad trails with differing levels of accessibility. Some seasons are better than others for viewing certain species. To find the right trail and time to visit, go to www.nps.gov/ever. Call 305-242-7700 to reach the park by phone.

Anhingas are common in the park. Sometimes called snake birds, darters or water turkeys, they are water birds from the warmer parts of the Americas.