Cooperative efforts aim to save a Northwest Florida Coast treasure

Loggerhead hatchlings make their way along the sand near Navarre. Loggerheads are the most common sea turtle species found in Florida, but are classified under the Endangered Species Act as threatened. (Photograph by Colette Boehm)
Spotlight

The shores of Florida’s northern Gulf Coast are popular for many types of visitors—and not all of them are tourists. Endangered and threatened sea turtles return to the beaches every year. Local groups ensure these magnificent creatures and their vulnerable hatchlings are protected.

May through November is considered sea turtle season along Panhandle beaches. In May, adult sea turtles begin to come ashore at night to lay eggs in nests they meticulously dig into the soft white sand. After a 50-plus day incubation period, dozens of hatchlings emerge from each nest and make their way into the warm Gulf waters.

While they have been around since the time of the dinosaurs, every sea turtle species is threatened or endangered. Hatchlings must escape many natural predators both on the beach and in the water. It is estimated only one in 1,000 survives until adulthood. When they do, it takes 20 to 30 years for them to reach reproductive age.

While increased coastal development and watercraft activity throughout the years has intensified threats to turtles, local groups along the Panhandle are coming to the rescue. From guarding nests and hatchlings to rescuing injured adults, volunteers and organizations across the coast are working to help turtles, big and small, survive.

Five of the world’s seven species of sea turtle—the Kemp’s ridley, green turtle, loggerhead, hawksbill and leatherback—are found in the Gulf of Mexico. All are threatened or endangered under the Endangered Species Act.

The loggerhead is the most common species found nesting along the northern Gulf Coast, but greens are seen here too.

One green turtle in particular has become somewhat of a star. Now known as Sweet Pea, the juvenile green turtle was found injured just off the beach near the Alabama state line in 2016.

After more than a year of rehabilitation, Sweet Pea moved to Navarre Beach Sea Turtle Conservation Center, where she delights visitors year-round.

“A family saw her in the water very close to the shore,” recalls Cathy Holmes, who manages the center. “They were kind enough to get her out of the water and they found she was still alive.”

Having been struck by a boat and ingesting fishhooks, Sweet Pea’s injuries led to two operations, which included amputation of her left front flipper and multiple bouts of digestive troubles.

She stayed at the center for 18 months undergoing rehabilitation.

While her surgeries were successful and her wounds healed, Sweet Pea was not a candidate for release into the wild. Because of the loss of a flipper and immobility in another, “she would get caught in currents and just spin around,” Cathy says.

Almost four years after her rescue—and having grown from an 18-pound juvenile to a nearly 30-pound adolescent—Sweet Pea now resides at Navarre Beach Sea Turtle Conservation Center. She has become a powerful symbol to visitors of the impacts—both negative and positive—that humans can have on the fragile turtle population.

She is cared for by volunteers and delights nearly 35,000 visitors a year at the center, which includes educational and interactive exhibits about sea turtles and other marine creatures, as well as the Gulf ecosystem. Educational messages focus on how human actions and habits affect the animals and their habitat.

Sweet Pea is just one of the stories of conservation, cooperation and education common along this coastline.

The Navarre center—with its mission to conserve and protect threatened and endangered sea turtles through community education and partnered research—was born from the vision of a community of committed volunteers. It secured its 501(c)(3) status in April 2013. Other organizations are also championing the cause.

A little more than 100 miles to the east, Forgotten Coast Sea Turtle Center in Port St. Joe has a similar mission. Though smaller in size, this center is just as committed to conservation and education, with a volunteer corps just as active.

Every morning from May through October, volunteers of both St. Joseph Peninsula Turtle Patrol and the Navarre Beach programs walk miles of beach to monitor sea turtle nesting and hatching activity. The turtle patrols look for tracks to locate new nests, which they mark and protect with educational signage and predator screens.

As nesting season turns to hatching season, the volunteers guard nests at hatching time to assist baby turtles, making sure they head toward the Gulf waters instead of nearby artificially lit areas. 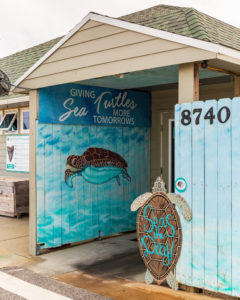 The C.A.R.E. Center, where Sweet Pea was taken, and Gulf World Marine Institute in Panama City are critical links in the conservation chain.

“They are very important,” Cathy says of the facilities’ biologists and medical personnel. “They are the emergency clinic and rehab facility for turtles needing care.”

Working with organizations and volunteers from Navarre, St. Joe and beyond, the facilities are committed to the rescue, rehabilitation and release of as many threatened animals as possible.

“One of the things about the sea turtle world is instead of being territorial, we are joyfully cooperative,” Cathy says with a smile. “It’s a great partnership.”

The daily work of each of these organizations is a valuable asset for northwest Florida’s beaches. Their efforts help ensure the survival of the amazing but endangered turtles that return to these beaches each year.

IF YOU WANT TO VISIT

Gulf World Marine Institute in Panama City is not open to the public.

What do I do if I find a stranded animal?

To report a stranded turtle in Florida, call 1-888-404-3922. Do not touch the animal, remove it from the beach or attempt to push it back into the water. This can cause the animal to re-strand and die. Instead, monitor it from a safe distance. While waiting for authorities, note the position of the animal and its breathing.

How close can I get to a sea turtle nest?

Approaching within 50 yards of a sea turtle nest is illegal. Please observe from a distance.

Why turn off beach lights at night?

Lighting pollution is a serious threat to many types of wildlife, particularly nesting sea turtles. When hatchlings burst from the nest, they scramble for the brightest horizon, typically the moon glimmering off the water. Artificial lights can lead the turtles away from the safety of the water. From May through October, turn off all exterior lights visible from the beach from dusk to dawn and avoid flashlights, fireworks and bonfires on the beach.

What can I do to ensure a clear path to the ocean for the hatchlings?

Remove all beach chairs, umbrellas and other items at the end of the day to avoid obstruction during sea turtle nesting season. Flatten sandcastles and fill in holes at the end of your beach visit to create a safe path for nesting females and sea turtle hatchlings.