Thanks to dedicated conservation initiatives, endangered Florida panthers are making a comeback

All eyes are on a female panther as FWC Fish and Wildlife Research Institute biologists release her at the Picayune Strand State Forest in Collier County in 2013. She and her brother were rescued as 5-month-old kittens in 2011 after their mother was found dead. They were raised at the White Oak Conservation Center in Yulee. A tracking collar allows wildlife officials to monitor her movements. (Photograph by Tim Donovan/FWC)
Spotlight

The push-me pull-me relationship between man and nature is no more evident than in the lives of the Florida panther. Centuries ago, pumas roamed freely across North America. Since 1900, the only population of pumas in eastern North America was found in Florida. As recently as the early 1980s, their population had dwindled to 20 or so, mostly confined to southwest Florida.

“They’re one of the most endangered species in the world, and they’re right here in Florida,” says Wendy Mathews, conservation projects manager with The Nature Conservancy.

“Our work to acquire land to protect habitat and collaborate with other groups to raise awareness is vitally important to the future of the Florida panther.”

Groups such as The Nature Conservancy, the Florida Fish and Wildlife Conservation Commission and the U.S. Fish & Wildlife Service participate in initiatives to help increase the panther population in Florida.

“Panthers are our state animal, and without them our wild places would not be whole,” says Darrell Land, panther team leader with the Florida Fish and Wildlife Conservation Commission. “Today, through conservation initiatives and genetic management programs, there are somewhere between 120 to 230 living in the wild in Florida.

“There is still more work to do.”

Florida panthers are tawny brown and can live up to 15 years, although most in the wild live only eight to 10 years.

The largest dangers to panthers are habitat loss and fragmentation, and vehicle collisions.

Another threat looms large for the panther: inbreeding and reduced genetic diversity.

“Beginning in the early 1990s, researchers began to see various abnormalities in younger panthers,” Wendy says. “The solution was to bolster the gene pool by introducing a few female pumas from Texas, where the closest other puma population existed.”

Eight females were brought into the Florida population. Over a period of eight years, they successfully produced 20 kittens through this genetic restoration plan.

“We were able to help the population rebound somewhat, but now we are facing other challenges,” Wendy says.

For the past year or so, researchers with the FWC have seen panthers and bobcats not being able to stand or walk normally.

“They’re showing signs of what appears to be a neurological condition, but we are continuing to investigate,” Darrell says. “We’re working with a team of global experts to determine the cause.”

One of the primary concerns for conservationists is habitat availability.

“Typically, a male panther has a range of 100 to 200 square miles,” Darrell says. “A female needs a smaller range that overlaps with the male’s, usually around 50 to 100 square miles.”

The Nature Conservancy in Florida is spearheading the purchase of lands vital to the survival of Florida panthers, particularly in southwest and central Florida. By linking isolated conservation properties and working with a host of state and federal acquisition partners to protect ranches and agricultural lands, the organization has been able to increase the area of protected lands that panthers can roam.

Today, there are many large conservation areas that support panthers, including the Big Cypress National Preserve, the Okaloacoochee Slough, Everglades National Park and the Florida Panther National Wildlife Refuge.

The Florida Panther Corridor, conceived in 1994, provides a connected network of protected lands for Florida panthers and many other wildlife species.

“We’re concerned not only about the size of their habitats, but also the access to necessary resources, such as water, food and natural cover,” Wendy says.

Because they are at the top of the food chain, panthers are an umbrella species. Healthy ecosystems have apex predators and other species that benefit greatly from the large areas conserved for panthers.

“They help maintain the ecological balance for many other plants and animals that share their habitat,” Wendy says. “By protecting them and encouraging the continuation of the species, we’re also safeguarding the environment for many other species and for humans.”

In 2017, a female panther was seen north of the Caloosahatchee River—the first time since 1973. In August, a female with two cubs was spotted in the same area.

“Finding evidence of a breeding female north of the river shows that panthers are capable of repopulating areas where they formerly lived,” Darrell says. “A larger population found throughout Florida and perhaps beyond could one day mean that the panther is no longer endangered and that our conservation efforts were a success.

“The key is to continue to educate the public about the importance of panthers to the environment and to understand that by protecting the panthers and other threatened and endangered species, we are ensuring a sound future for humans as well.”

Safety notes: Panthers are most active at night. Protect livestock inside fences and enclosures. Keep pets indoors or in a covered kennel at night. Give panthers plenty of space. Most will avoid confrontation. Give them a way to escape.

As the official state animal, the Florida panther has another role: representing the Florida Fish and Wildlife Conservation Commission’s research and protection of the state’s wildlife. 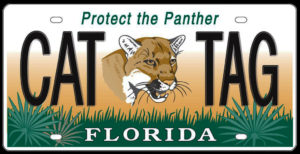 The Protect the Panther license plate is one of four whose sales include a $25 donation to help fund conservation and wildlife projects across the state. Funds from the vehicle plate directly support the state’s Florida panther initiatives.

Learn about Florida panthers, initiatives to protect them, organizations involved in conservation to safeguard their habitats and ways the public can become involved. 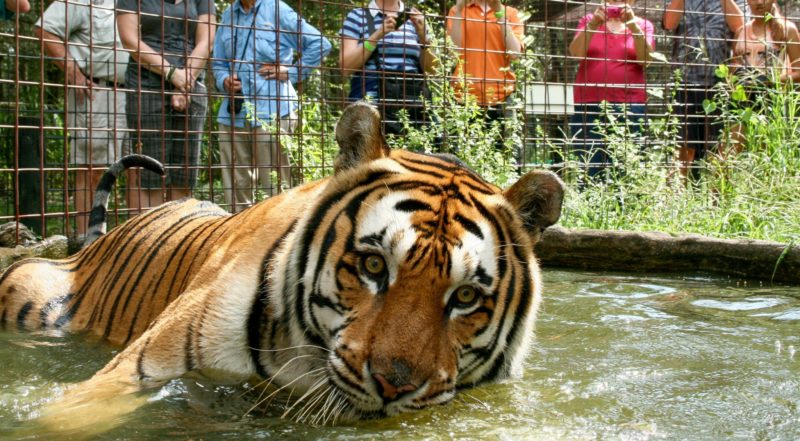 A Heart for Protecting Exotic Cats