In rural and big-city neighborhoods around the world, free treasures are stored in little houses. Book lovers of all ages are invited to open the door and make a selection.

Little Free Libraries are part of an initiative to build community and foster reading.

In honor of his mother—a schoolteacher and lifelong reader—teacher Todd H. Bol created the first LFL in 2009. He placed it in his Hudson, Wisconsin, front yard in 2010.

The “take a book, share a book” concept resonated so strongly with his neighbors, Todd decided to take the grassroots movement worldwide.

Karen Newfield was one of the early stewards, ordering a kit from the LFL organization.

“I decorated it to match my home and even went to a local roofing company to put on a very realistic miniature metal roof,” Karen says. “I put some of my own books in there and instantly had people leaving me notes, bags of donated books on my porch and thanking me as they jogged and walked their dogs. It turned out there was just something everyone loved about taking a book. They would say, ‘Really, it’s free? You don’t want it back?

“Sometimes I would see kids from my window debating which books to take. Their moms said only one at a time. People just kept thanking me and I kept thinking, ‘My gosh, the public library is down the street.’ But they loved my library. They loved the surprise of finding this unexpected gift on their walk or jog.”

When Karen and her husband, Kevin, moved from Tequesta to the Florida Keys, a former neighbor called, concerned something happened to the LFL. Karen explained her LFL moved to the Keys, too.

Her old neighbors pitched in and replaced the LFL.

“She profusely thanked me for the years of happiness I had brought through books,” Karen says. “I have been an avid reader my whole life—and I don’t just love to read, but get real joy by sharing, discussing, recommending and encouraging books to others.”

For the past decade, Karen has reviewed books on various sites, including her website, www.readingandeating.com.

“I can connect with just about anyone discussing books, even if we have little or nothing else in common,” Karen says. “I communicate with readers and writers from all over the world.”

Karen is hooked on reading and LFLs. She manages an LFL based at her husband’s medical office in Jupiter.

“It is a mostly older population,” she says. “It has been a huge success. They bring me tons of books and joke that they get a Medicare appointment and book as a bonus. They love talking books with me. It brings so much pleasure to their day. One patient, who has two very large libraries in her home, has left me in her will to someday receive all of her books.” 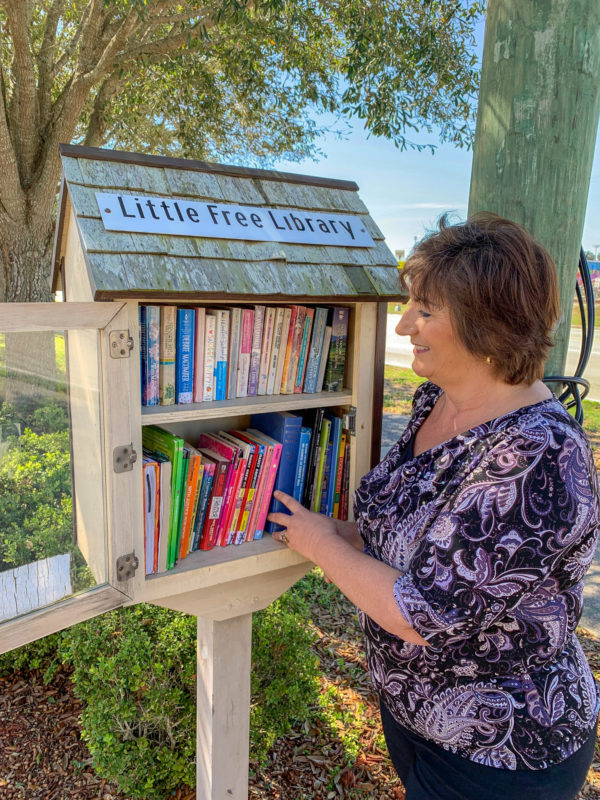 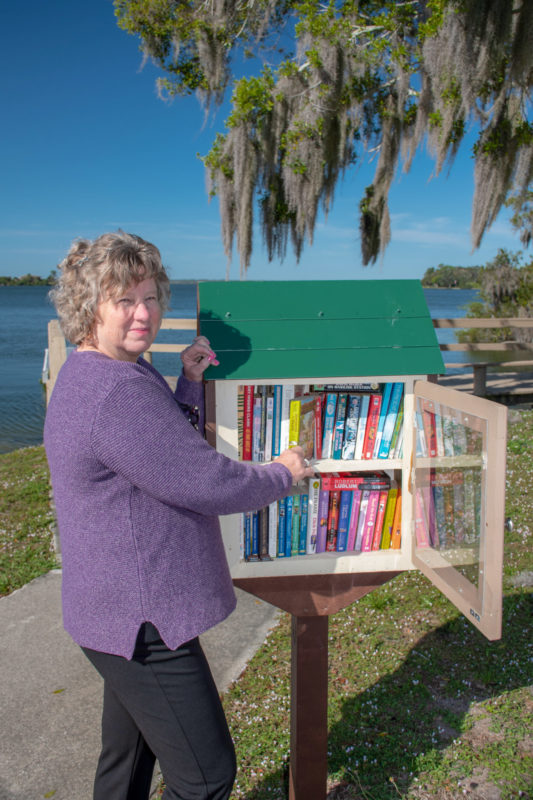 The area’s first batch of Little Free Libraries were put in county parks in 2014. “I liked the idea, especially since Highlands County is rural, and some citizens might not have easy access to the county’s three public libraries,” says Vicki, top, then-director of Highlands County Parks and Recreation. She approached Library Director Mary Myers, right, about having the libraries provide the books. The partnership continues. The effort has been so successful many other people in the area have created LFLs. 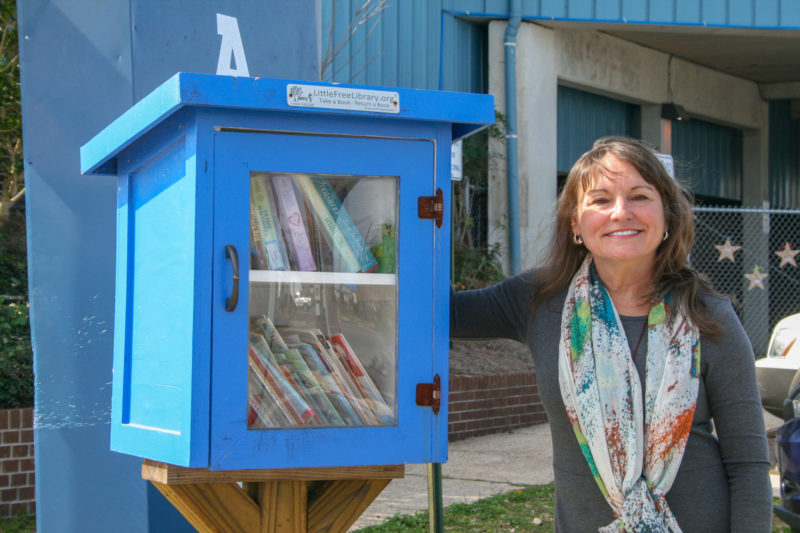 Cathy, media and assistive technology specialist at Margaret K. Lewis School in Millville, dedicated the LFL in honor of the school’s namesake on Margaret’s 100th birthday—with Margaret in attendance. Born in 1918, Margaret started her first teaching job in O’Brien, Florida, in 1940, and began teaching students with disabilities in the early 1960s. When Oak Grove Elementary School in Panama City closed in 1968 due to integration, the building was repurposed as a school for students with disabilities, with Margaret as principal. In 1980, the school was renamed after parents approached the Bay County School Board. Margaret retired in 1983, but served on the school advisory council until her death in February 2019. “I met Mrs. Lewis when I first began teaching at MKL School,” Cathy says. “She has served as a mentor to me and hundreds of special educators over the years. I’ve been inspired by her passion and dedication to improving education programs for students with special needs. One thing I learned from Margaret was to never stop learning. Be curious. When we heard about Little Free Libraries, we knew it was the perfect way to honor a woman who has inspired so many people to be lifelong learners. Although Panama City suffered catastrophic damages due to Hurricane Michael in October of 2018, the Millville Little Free Library stood strong, continuing to serve the community in the aftermath of the storm.” 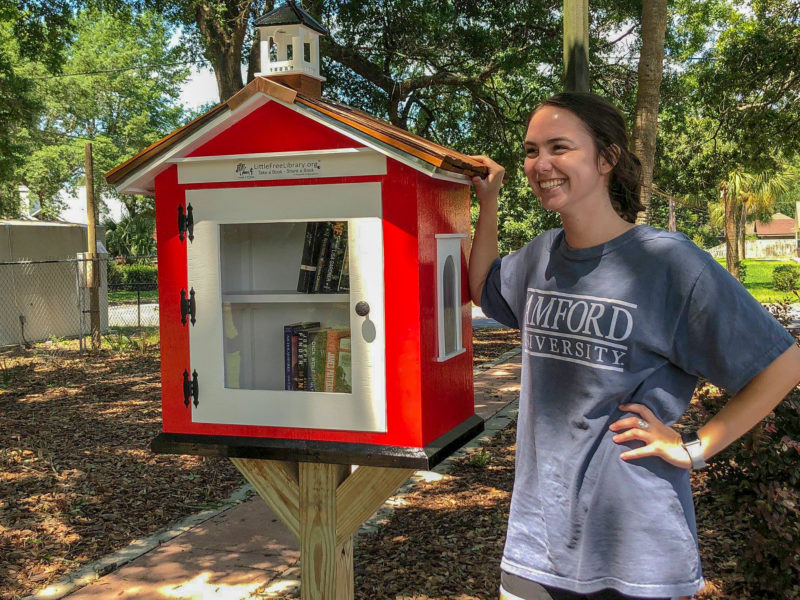 “This Little Free Library was built as a service project for my master’s program in speech-language pathology at Samford University,” Elizabeth says. 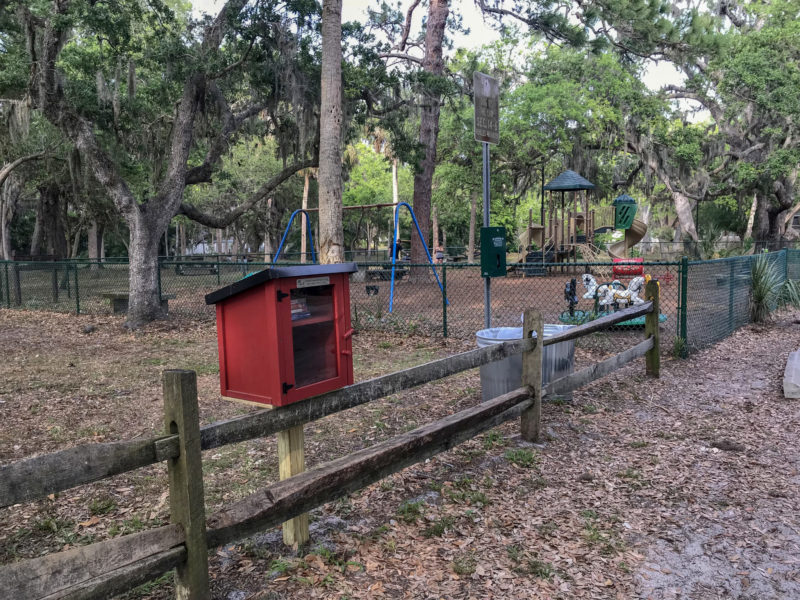 “Last year as I thought about my birthday, I asked for money toward a LFL,” Sherry says. “My sister has sponsored one in Georgia, so I thought it would be a great way to express my gratitude for this neighborhood and the wonderful people here. I played in Lewis Park as a child, and now I take my granddaughter there. As a longtime educator, I know the importance of books and reading, and lots of kids come to the playground. It’s well used by both children and adults, and my neighbors help keep it maintained.” 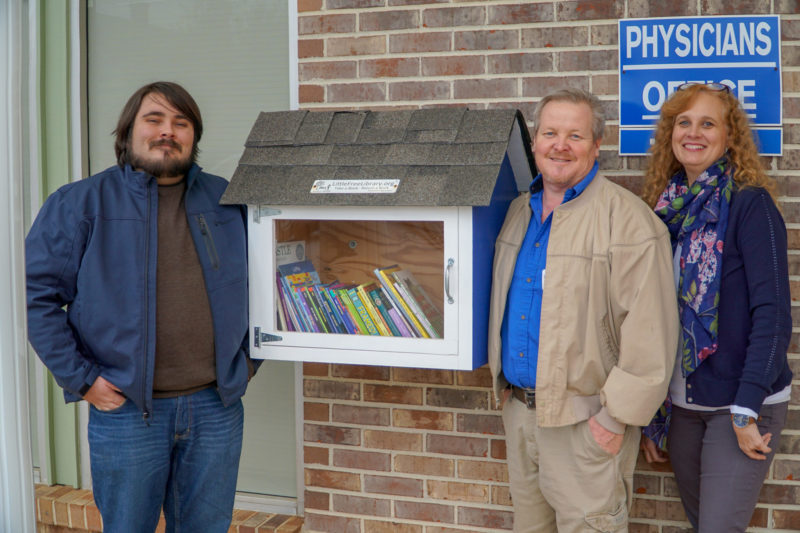 Travis Allen, Jay Elementary School’s technology paraprofessional, left, worked with students to build the LFL. Ricky Sanders, center, Jay Hospital plant manager, worked with Brenda, right, the elementary school librarian, to coordinate placement of the box. “When I first started reading about the LFL movement I was giddy,” Brenda says. “It’s 30 to 40 minutes from here to get to a bookstore. To provide a resource just a couple of miles from home is the reward. It is our goal to serve not only the students and families of Jay, but Jay Hospital patients and families who will be having their health care needs met by this institution.” 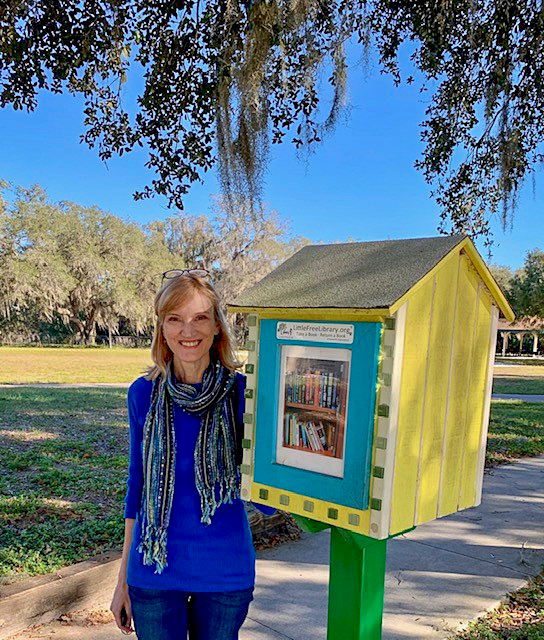 Each of the branch libraries in Manatee County was sent a LFL to decorate. “Children’s books—particularly beginning reader titles—seem to be popular,” says Mary, who is with the Rocky Bluff Library in Ellenton. “In addition to books, I leave information about the library system, resources we offer and upcoming programs. Rocky Bluff receives donations throughout the year for our two book sales. I put aside books I think might be good choices for the Little Free Library. I feel like the book fairy when I add new items.” 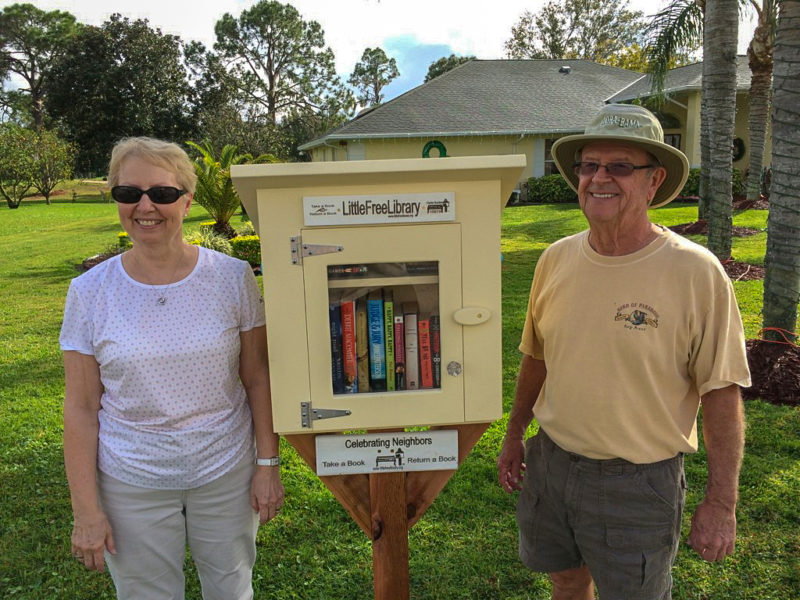 Shelley’s husband, Matthew, built this library for her parents, Tyree and Mike Dickens, as a Christmas gift. “Their neighbors have been coming to the door of their house for years to borrow books,” Shelley says. “We thought we’d make it easier on everybody by bringing the books outside. The library was built from scrap wood in our garage, and even the screws were recycled from an old canoe my husband built years ago. My three children painted dragonflies to decorate the outside, making it truly a gift from our whole family to my parents and their neighbors.” Shelley and Matthew have an LFL at their home in Orlando, and her brother has one at his restaurant in Miami. 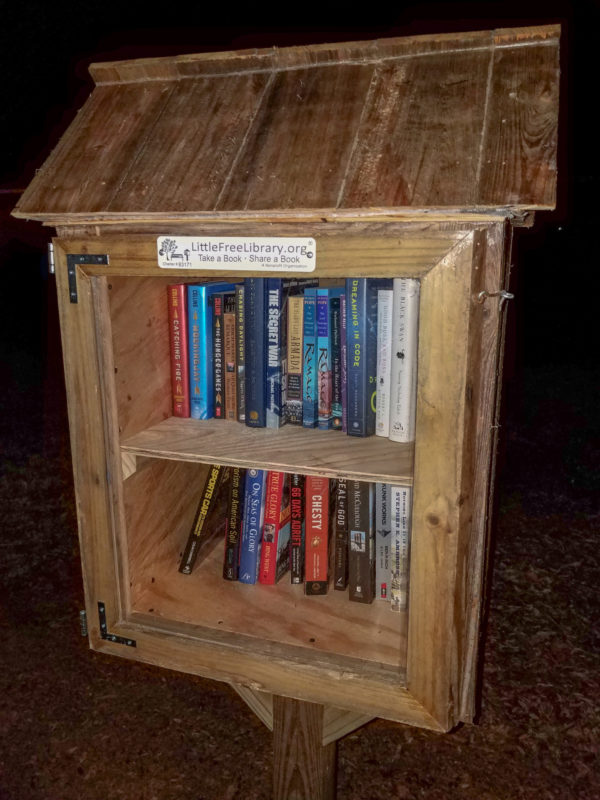 The outside of this Little Free Library is built almost entirely from scrap wood or excess materials from around the house while recovering from Hurricane Michael, which struck the Panama City area October 10.
It is a tribute to survival of a devastating storm, and spending weeks reading books instead of watching television or surfing the internet as utility services were restored in the area. 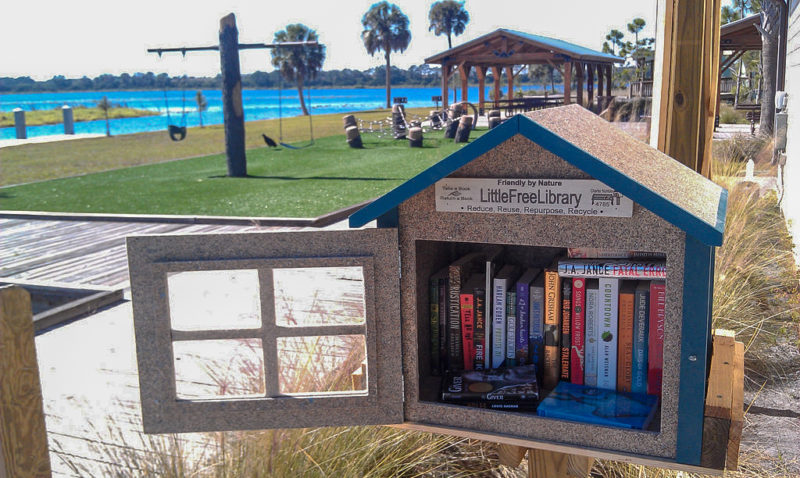 The Little Free Library at Jiggs Landing is the third LFL in Manatee County, and the third in the Parks & Natural Resources Department. Installed in 2014, this LFL overlooks the Braden River. The historical site and preserve include a boat ramp and offers great fishing. 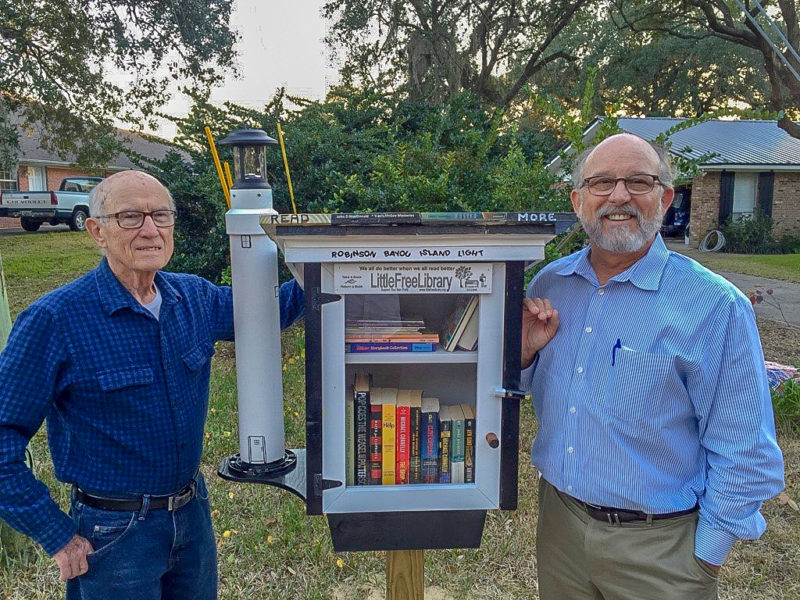 Father-and-son authors Edward Pipkin, left, and Leelon Edwards were given the LFL as a Christmas present by their children/grandchildren. “The library was built to look like a coastal lighthouse,” says Leelon. “Our town doesn’t have one, but there are many in Florida, and we support their preservation and history.” The LFL served as a neighborhood bulletin board after Hurricane Michael. 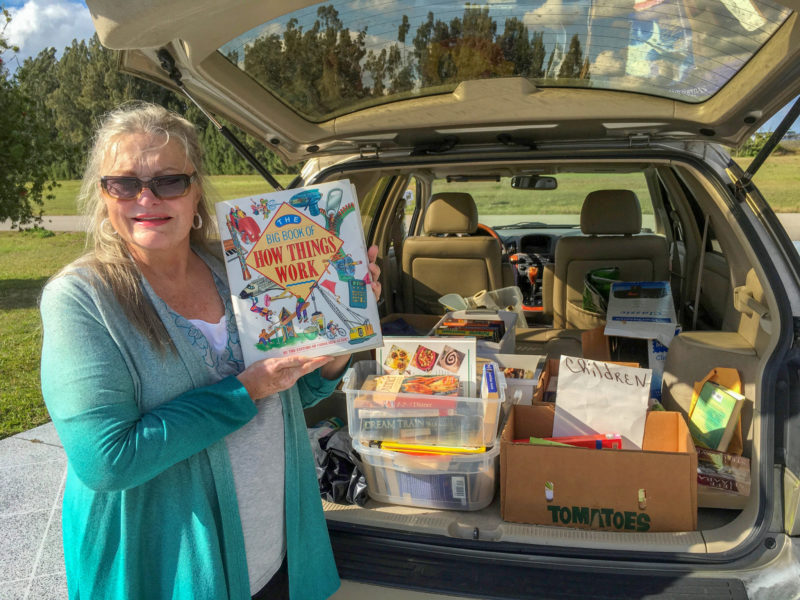 “The book lady,” as Sam is known, has been steward of two LFLs for the Spring Lake Property Association for three years. More “branches” are planned, including the S.S. Bookworm—a half boat converted to hold books. “I’m hoping to build some kind of annex onto our LFLs to hold even more books,” Sam says. “I have about 1,100 books in trays in my two-car garage, about 200 in my car and about 200 in our LFLs. Hundreds of books come and go through our LFLs every month.” 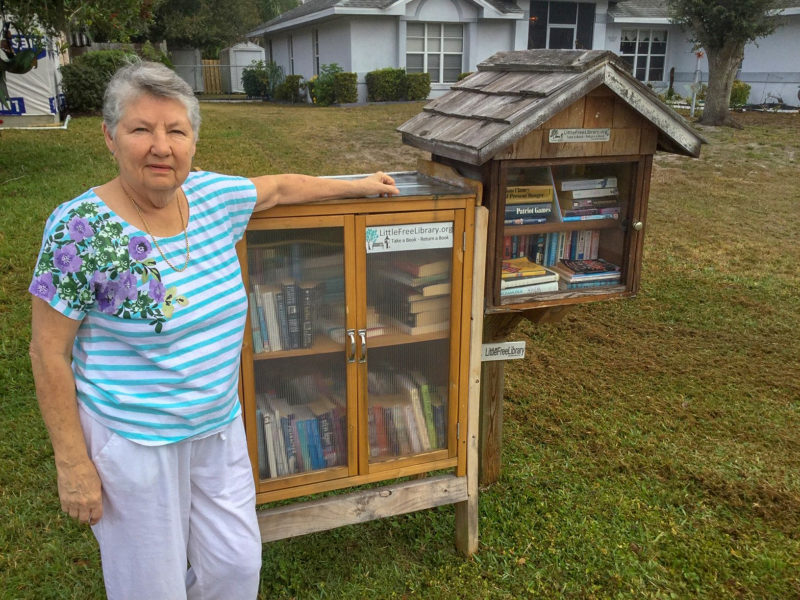 “Nothing in life is more enchanting, can take you more places, introduce you to more cultures, than to read,” says Barbara. “Reading can take any child on trips, not even limited by their imagination. Reading can heal grief, push aside loneliness, inform, educate, restore and bring joy. I have taken many people on a reading journey, with books they would never have known. People have donated books, enjoyed and returned books.” 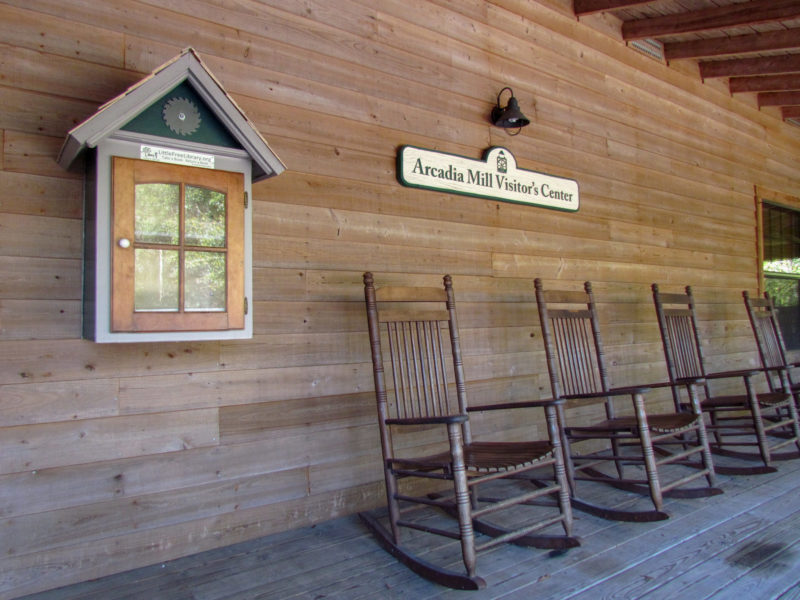 The visitor center at the University of West Florida Historic Trust site is open Tuesdays through Sundays, but the porch with a LFL is open any time, and includes rocking chairs perfect for sitting and reading.