Pine and palm are plentiful throughout the preserve. (Photograph by St. Joseph Bay Preserve)
Spotlight

“It’s the most diverse area in the Southeast,” says Director Sandra Chafin of the Port St. Joseph nature sanctuary.

Although hosting visiting researchers has been put on hold this year due to COVID-19—the preserve has 14 beds and three rooms to rent out for $10 a night to professionals—the recreational side of the preserve remains open. There are several hiking, biking and horseback trails and a kayak-canoe launch on Cape San Blas, all accessible from sunrise to sunset. Social distancing is required on the trails.

“The timing right now is good because people want to get out in the outdoors and they want to be safe, too,” Sandra says.

In a normal year, the preserve offers a visitors center with exhibits and nature studies, tram tours and special events, such as Bay Day held the second Saturday in February and October.

Sandra opened the visitors center this fall, and hopes to offer tram tours limited to 10 people with social-distancing mandates and required masks. 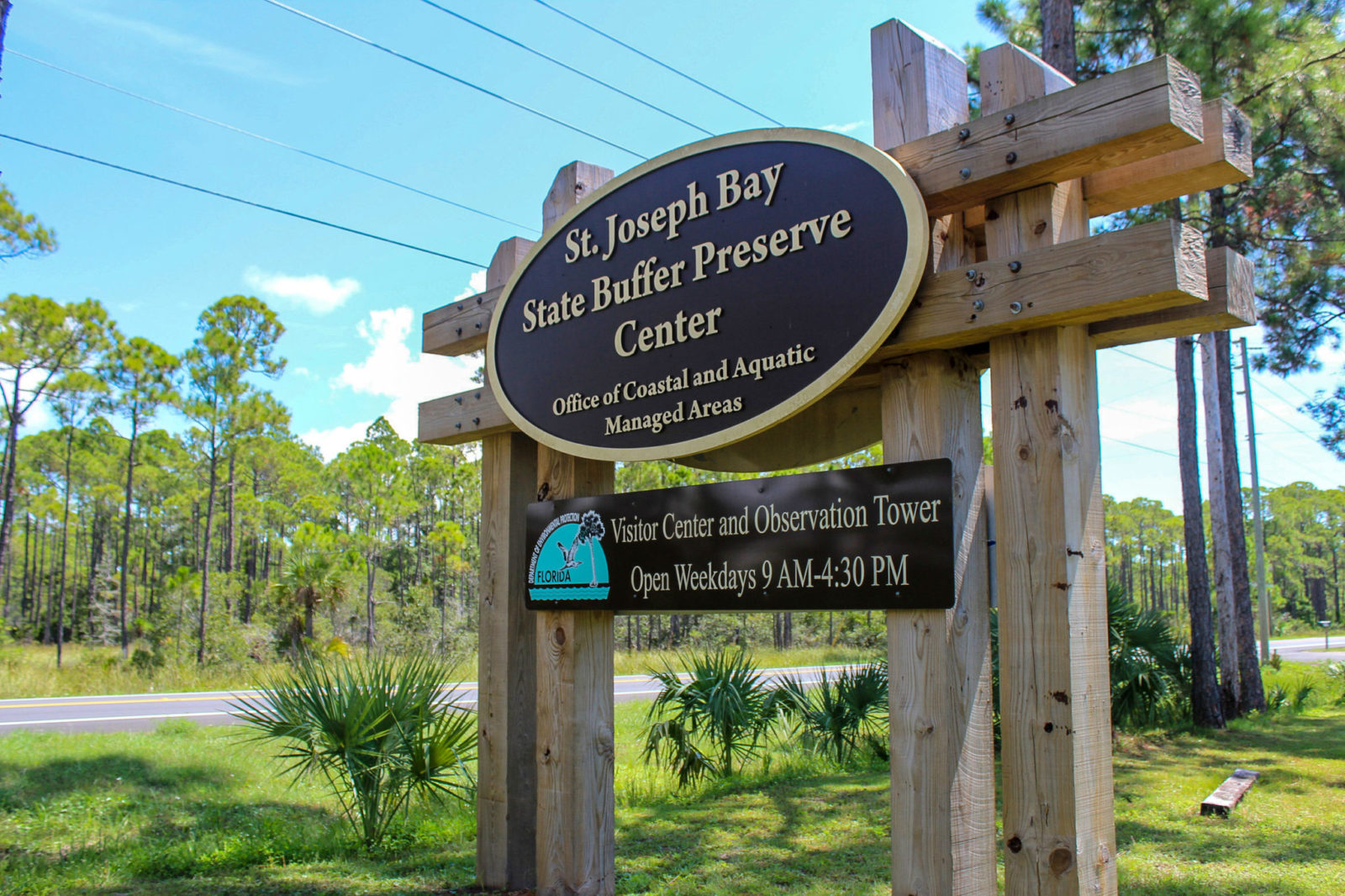 St. Joseph Bay State Buffer Preserve gets its name from the 5,026 acres that serve as a buffer from the inland water runoff into St. Joseph Bay. Fertilizers from farms and other toxins flow toward the sea. The preserve helps filter out those chemicals, Sandra says.

“All of the water that comes down through the watershed is naturally cleaned as it goes into the bay,” Sandra explains. “If we were not here to clean it up, it would go straight into the bay. We are here for the protection of St. Joseph Bay.”

Keeping the bay’s waters pristine allows for some of the finest scallops in North America.

“St. Joseph Peninsula is the only bay that doesn’t have fresh water flowing into it,” Sandra says. “We have the best scallops when conditions are perfect. It’s fun to get them, like Easter egg hunting.”

In addition to protecting land that serves as a water purifier, St. Joseph Bay State Buffer Preserve works to improve water flow throughout the area. For instance, low water crossings on roadbeds allow water to flow across streets naturally and not straight into ditches.

“It restores hydrology as nature had intended it,” Sandra says.

An acre adjacent to the Gulf of Mexico provides beach dunes, where visitors can see migratory birds. Ten acres of blackwater stream along Money Bayou feature two different water patterns: tide flowing in from the Gulf and freshwater flowing down from rains inside the preserve.

Many Southeastern rare and endemic species proliferate inside the preserve. It is not unusual to spot rare plants growing beneath the tree canopy.

Sandra says regular prescribed burns help bring those plants to life. She notes many of them are buried underneath organic matter and emerge after a fire.

“You never know what you might see blooming on the side of the road,” she says, adding that visiting plant experts have found several rare species. “In addition, there are native plants, sunflowers, rhododendrons and ornamental grasses blooming throughout the year. It’s nature on display.”

Staff members have spotted deer, hogs, coyotes, otters and alligators, and a manager recently found bear tracks. The bald eagle that made its nest in the preserve did not return, but visitors occasionally witness a bald eagle soaring into the bay to catch fish for supper.

In addition, there are 19 archaeological and historical sites inside the preserve dating from prehistoric times, showcasing how indigenous people lived in the region for 12,000 years.

Numerous trails take visitors into the heart of the preserve and near water, whether it be streams, bayous or the bay.

Dogs are allowed if kept on leashes.

Water and insect repellant are recommended when on the trails—especially in the hotter months—and cellphone reception can be intermittent.

The preserve includes a tract of land on the bay side of St. Joseph Peninsula that makes for a perfect day trip. The hike through pine scrub leads to a picnic shelter overlooking the bay. Sandra says plans are in the works for a dock to be installed for boat access. Bird lovers may find shorebirds and migratory songbirds along this remote trail.

In a typical year, the preserve hosts 50 to 60 researchers who study the bay or uplands. Some return every year.

It’s all because the buffer and its isolated preserve provides a special view of distinctive Florida environments, Sandra says.

“St. Joseph Bay is unique for sure,” she says. “We like to say we’re in the middle of nowhere but in the center of paradise.” 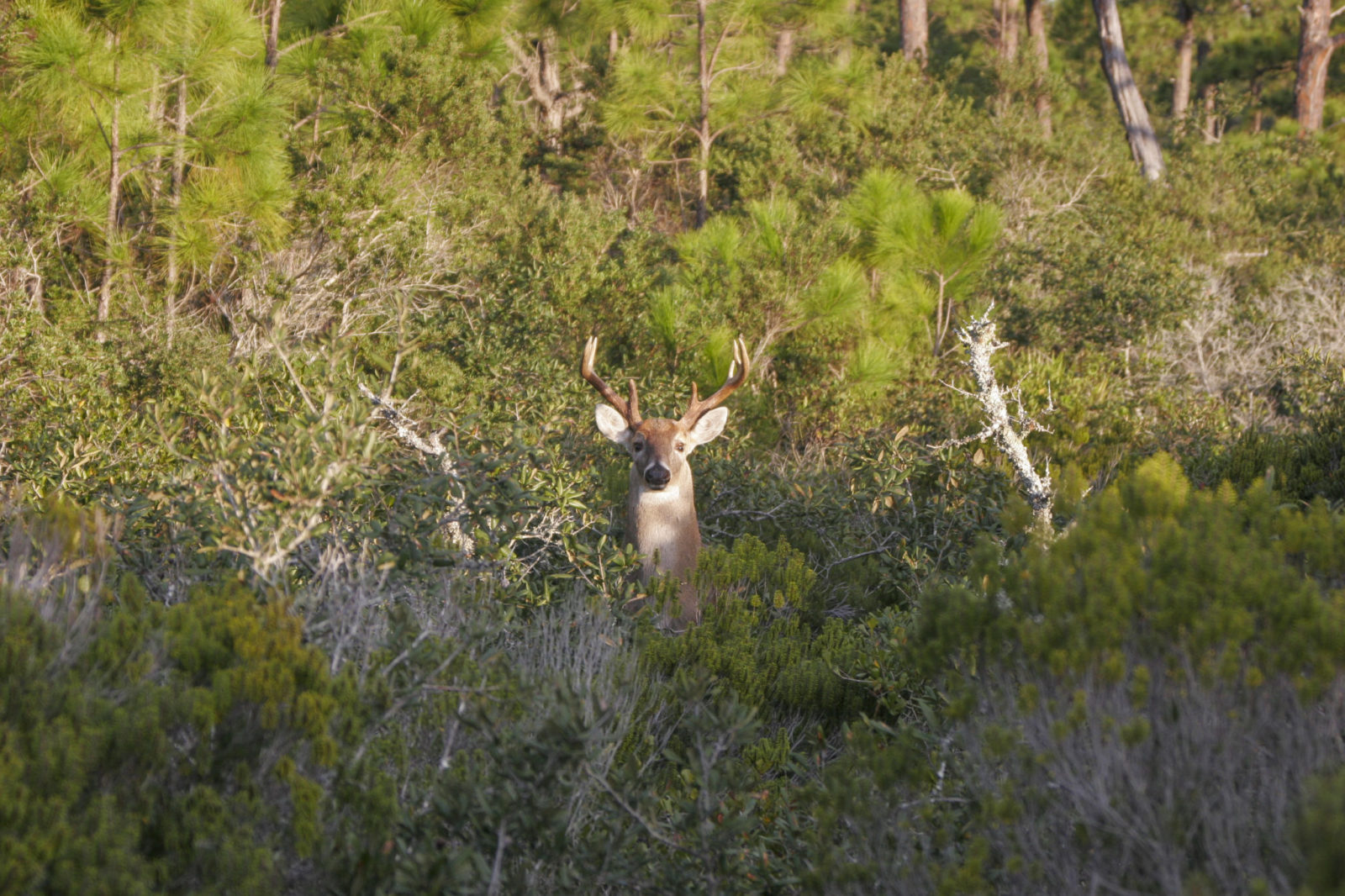 In 2004, about 100 bottlenose dolphins washed ashore in St. Joseph Bay within a two-week period. The cause was unknown. Brian Balmer, a research assistant at the time with Mote Marine Laboratory in Sarasota, headed there to help study dolphin residents and take tissue samples.

“People didn’t really know anything about bottlenose dolphins in St. Joseph Bay up to that point,” Brian says.

He thought the region might be an ideal place to perform his graduate work, but his financial resources were limited. St. Joseph State Buffer Preserve offered housing right on the bay, a kitchen and meeting spaces for a small fee.

Starting in 2005, Brian spent three to six months at a time at the preserve, counting dolphins in the bay and studying possible stressors on the animals. To collect tissue samples—pulling in 500- to 600-pound dolphins with gill nets on specially modified boats—Brian needed more people.

“It takes an army to catch them,” Brian says. “We brought in 50 to 60 people. The amazing thing about the preserve is that it can handle a lot of people. It was absolutely perfect.”

Sixteen years later, and now a scientist with the National Marine Mammal Foundation, Brian has proved through research that dolphins died of a biotoxin in 2004. He also learned St. Joseph Bay contains both resident and migratory dolphins, the latter traveling up and down the Gulf Coast.

In addition to the preserve allowing him housing to conduct vital research over the years, Brian interacted with researchers from across the country, studying everything from birds to controlled burns.

“It was unusual to have so many researchers in one place doing all kinds of research,” he says. “It’s a great example of how a state can supply valuable resources to researchers and nonprofits.” 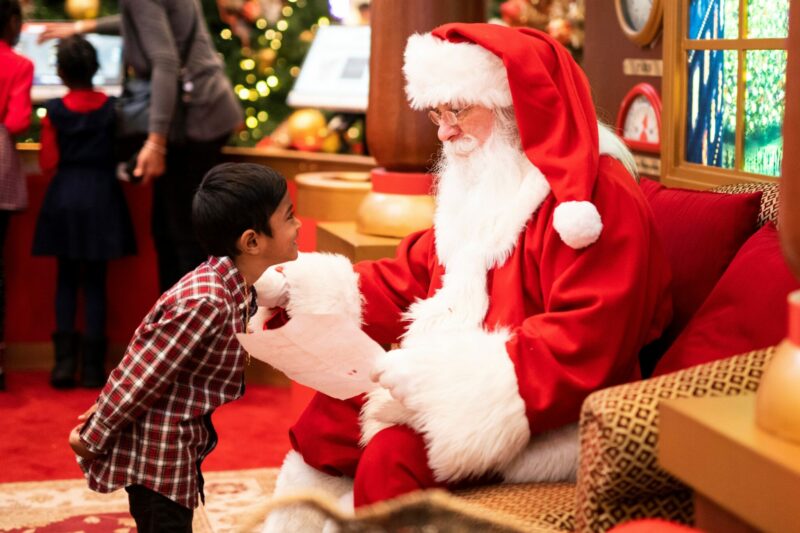